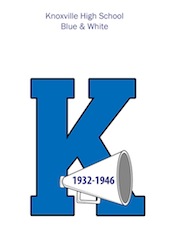 The period of 1932-1945 was a tumultuous one, not just in Knoxville but all across the country.  The Great Depression that began in late 1929, persisted into the 30’s.  As the nation was beginning to claw its way out of this economic abyss, the winds of a new war only a little over a decade from the shaky conclusion of WWI began to blow.  From the beginning of WWII in 1939 through it’s conclusion in 1945 the focus of both attention and finances was on material for “the boys” who were fighting.

As a result of these pervasive conditions, the production of traditional yearbooks for Knoxville High School was curtailed.  In their place a special and expanded KHS newspaper was printed for each graduating class as a yearbook replacement.  A photograph of each graduating senior was included in the year-end edition of the paper and it was usually printed on a higher quality paper to enhance the quality of the photos.

During the period, KHS also began to have two graduating classes, one in January and one in May. Following are these Class year end newspapers for this historic period in the life of KHS and our Country.