On D-Day 2007, I watched a 2-hour Military Channel documentary on the June 6, 1944 invasion of France that began Operation Overlord.  This bloody but successful battle on the beaches at Normandy initiated the effort that resulted in the re-capturing of France and an ultimate end to the War in Europe 11 months later on May 8, 1945.

Thoughts of the brave invading troops coupled with; film, candid photographs, quotes and in some cases actual voices of the young men,  were combined to make a riveting documentary.   About 40 minutes into the film I was startled to see the face and hear the voice of a young man with the same name as my 6th grade grammar school teacher in Knoxville, Tennessee.  My heart raced as I realized that it was not just a man with the same name…….it was him…..Mr. Raulston, a man I admired and who had influenced me greatly.  As a young, impressionable boy, I was always struck by his: optimism, friendly smile, command of the classroom and broadly administered kindness to his students.  Woops…I almost forgot….and his ever present bow tie. 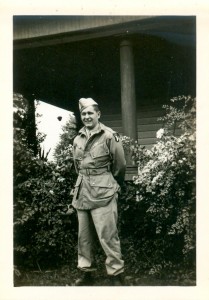 I could hardly wait for the program to finish so I could try to find him after all these years.  I remembered his home town, South Pittsburgh, Tennessee, because it had an odd name and Mr. Raulston spoke of it often.  I was so afraid that I would not be able to find him.  As I began to Google him, thoughts raced through my mind.  Did he move, how old would he be today and is he still alive, will he remember me…..so many students…..so many years.   I can’t believe it……his name came up.  I clicked a link and found a book that talks about his parachuting onto Omaha Beach that fateful day.  I’ll get to that later, I thought…..I want to find HIM!   A few more clicks on a people search site and his name came up.   WOW!  He is still in his home town!  My heart was really racing now.  This was not just a grammar school teacher he was a builder of young men and women….and he had really influenced me.

I picked up the phone and punched in the numbers.  In my nervousness I hit two keys at once.  Realizing this error I started over….how hard can it be to get 7 numbers right…..right?  Ring….ring…..”hello” came a sweet energetic voice on the other end of the phone….I choked.   “Is this the home of Mr. Raulston who taught grammar school in Knoxville?”   “Yes it is” she said.  Bingo!!  I gave her my name and she responded excitedly by asking if I was……and she related my full name.  I was shocked.  She said he had talked of me often over the years that had ensued.  Her use of the word “had” was an ominous indication of the reality that she then related…….”he died in 2000.”  I was crestfallen…..because he was gone….because she was without him….and because I would not be able to tell him how much he had meant to me.  We had a great and uplifting conversation and I hung up.   After searching through photographs sequestered away for years, I finally found the photo of that class.  I showed this photo to my wife and children as I related this story to them.

Three years passed and this year again I watched the D-Day documentary.  Knowing the approximate time his story would be told, I waited expectantly to see his picture…there it is…I listened and watched and smiled.  My mind then floated back to the conversation with Mrs. Raulston years earlier and I decided to call her again.  That same sweet, strong voice greeted me again.  We enjoyed a warm time of fellowship discussing a man we both loved and by whom we were both influenced.  I told her I had a photo of the 6th grade class and wondered if she had it also.  She did not……but she does now.  I sent it to her along with a photo of my family.  I learned more about their family and purposed to go see her in the next few months.

If this were only a story about me and my 6th grade teacher it would be nice for a few people, but that would be about it.  I think, however, that it has much more significance.

First, I think it is indicative of the incredible power words can have on impressionable young men and women…….that would include EVERY YOUNG PERSON YOU KNOW!  Loosely quoted but  very accurate he told me; “….I’m going to watch you in the years ahead.  You can amount to something and you will if you don’t get distracted or lazy.”  He had seen me get distracted…..but he had also seen something in me he wanted to make sure I developed. He also cared about me….a snotty nosed kid on a collision course with puberty, hurdles, opportunity, worldview challenges and…well just life.  I told Mrs. Raulston that I could to this day take her to within one foot of the place I was standing when he told me this.  I can’t  remember specifics of what he taught me during the 6th grade, but I remember how he treated me and what he told me.

Secondly, I am embarrassed and chagrined that I didn’t find him early enough to tell him in person how he had influenced me.  Have I amounted to anything?  I’m not the judge.  God is.  If the standards by which I am judged are my faith in Christ,  the quality of; the wife God blessed me with, the three children from that marriage and the eight grand-children that are still young enough to think I’m pretty special,  I believe I have successfully met his challenge.

The broader message for us all is to take both care and time to encourage impressionable people who we engage daily, especially young people.  We can make a difference.  And when those who have influenced us come to mind….TELL ‘EM, it’ll bless us and them.

Thanks Mr. Raulston.   I know he can hear me somehow….and is smiling.