Saturday afternoon October 29, Charles “Bud, Big Lo” Lobetti passed from this life to a much better place.  His physical absence from the body of East High grads leaves a gigantic hole and hundreds of shocked and intensely saddened friends.  I miss him now and always will. 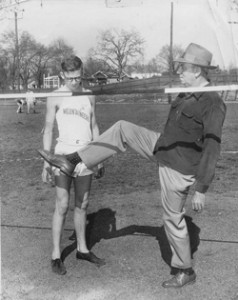 I think “Big Lo” is a moniker he acquired after high school.  At least I never heard him called Big Lo during those days in the 50s.  I didn’t hear Charles either…or Charlie.  Charlie was reserved for his father, a kind and well-respected man and track coach at East.  On the basketball team we always called him “Lobetti”…never anything else.  But in the last decade to most of his friends it was always Bud or Big Lo.

Bud was bigger than life, not because he was 6’-5” or that he tried to be a big shot.  It was just that he had the presence to command a room and the situation.  He was like a magnet…you were drawn to him…and his heart that was even bigger than he was.

Over a period of 50 years memories fade and feats of some athletes are overshadowed by the most recent “phenom” in each sport.  Such has happened to Lobetti over the last 5 decades.  Bud earned 7 letters in 3 sports at East from 1955-1958.  To my memory no other athlete had the breadth or depth of accomplishments at EHS, over its 17-year history, except for Kyle “Buddy” Cruze.

Bud was a good basketball player (City County All-Star participant), a better football player (first team All City) and a phenomenal track athlete.  He excelled in the 120 high hurdles and 180 lows. Bud was an excellent broad jumper and a nationally ranked high jumper.

In the 50s the high jump style was the Western Roll, having replaced the scissors method of two decades earlier.  Bud’s father, Charlie, himself an accomplished high jumper, taught Bud his craft and taught him well.  He won the State high jump in 1956 and 1958.  In 1958 he also won the low hurdles with a new Tennessee record of 19.5 seconds, a mark that exceeded the best time in 34 other states and equaled it in 5 others.  He also finished second in the high hurdles in ‘58.  That year he teamed with Don Whedbee, to lead EHS to a runner-up finish in the State to perennial winner the Oak Ridge Wildcats.  In 1958 Bud also won and set a new Tennessee State record in the grueling 10 event Decathlon with 7729 points, 249 higher than the previous record.

These accomplishments may have defined what Bud did athletically as a teenager but they do not define who he became as a man.  Character defined Bud Lobetti.  He had character…and he was a character!  I contend that neither of these statements are even arguable.  And the hundreds who called him friend would fight you if you challenged either.

When a group of us began planning our 50th class reunion I talked with Bud every week or so.  He asked me to take on a small job and I agreed…after all Big Lo was…well, Big Lo, and he was “in charge.”  No surprise there, I’m sure you agree.  Over time we talked more frequently…and soon it was every day. 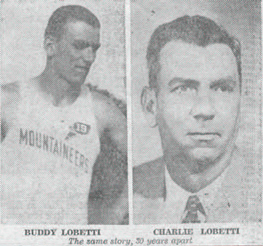 In those conversations I saw a Bud Lobetti I had never seen.  We increasingly talked about life, family and faith…the things of true value.  We shared heart issues like we never had before…and we developed a closeness that seemed to grow each time we spoke.

It may be common to talk about Bud in the past tense.  I think, however, that this does a significant disservice to his position as a believing Christian.  Today Bud is more alive than any other day in his 72+ years. And he is rejoicing with Joyce, his beloved wife of 5 decades who preceded him in death about 4 short months ago.

Our EHS Graduating Class of 1958 ambled…or probably strutted…I can’t remember…across the stage at UT’s Alumni Memorial Gymnasium on June 3, 1958.   On that morning we received our diplomas from Dr. Charles O. Moffitt, formerly head football coach at East.  If on that day you had told me I would ever tell Bud Lobetti I loved him, I would have thought you were crazy…and probably told you so.  But the close friendship we developed in the last 4 years led me to tell him just that about 3 months ago.  From that day forward we always ended our frequent conversations with those words of endearment and encouragement to each other.

A couple of weeks ago as we walked toward our cars after Bud, Tom Burnett and I had breakfast, I hollered to him…”Hey Big Lo, I love you my friend.”  He responded, “I love you too J. Ross.”    I’ll remember that brief exchange and my dear friend Bud Lobetti for a long time.

Editor’s Note:  The two photos are of Bud and his father, Charlie Lobetti.  The one at the high jump bar was taken in April of 1956 when Bud was a sophomore.  At that time, his father held the Tennessee State record in the high jump at 6’-2 ½.” This was always a favorite photo of theirs.  The other was of Bud as a senior at EHS and his father taken 30 years after he was the same age as Bud was in his picture.  It was in the Knoxville Sentinel along with a lengthy article about this father and son team.

Following is a link to the obituary for our good friend and classmate, Bud Lobetti,  The family will receive friends from 3:00 pm untill 7:00 pm on Thursday November 3,  followed by a memorial service at 7:00 pm.  Both will be held at Salem Baptist Church. The address for the church is:

Posted in In Memory Of