There were more than a few gathering spots for East Hi Mountaineers in the 50’s and early 60’s….Babe Malloy’s on Chapman Highway, The Tic Toc on Magnolia with root beer in a frosted mug, Nan Denton’s Orange Julius on Magnolia near Park Junior High and the Blue Circle at Chilhowee Park, to name a few.  But the Cherry Park-In was the real “in place” during the period.  And second place was far behind. 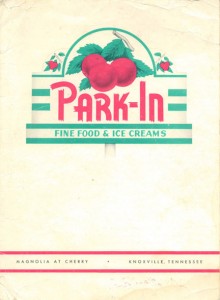 As I think back with nostalgia on the “Park-In,” as it was affectionately known, my mind’s eye tells me the building was massive.  But the attached photo tells a different story. The picture on the front of the menu illustrates the degree to which a seven-decade-old mind can be tricked.  Heck, the dimensions don’t matter, the memories are still big…and vivid.

It seemed expensive, too.  But the attached menu also dispels that long-held view.  You could get a hamburger steak, two rolls…homemade…a small Coke and a piece of coconut pie…for a DOLLAR! A better coconut pie has never been cooked…period!  It seems like a pittance now, but a buck was hard to come by then.  After I went to college, my brother and I would occasionally have lunch there…trying to recapture some of the memories…or inhale a piece of pie. Somehow, the experience wasn’t the same, but the pie had lost none of its scrumptious taste.

I lived on Cherry Street throughout my years at E.H.S.  Other East students’ homes bordered on Cherry…the Valentines, Wrays, Worshams, Davis’, Smallmans, Harbins and Rachel Yarnell.  Many lived close enough to walk there…which we rarely did.  It was a place to which you drove, if you had a car…which I didn’t, or rode with someone else…which I often did. There was only a handful of student cars at East in the 50’s.

After every football or basketball game, Mountaineers swarmed like locusts at the corner of Magnolia and Cherry, capturing the booths, counter and walking around space.  For some reason, it seemed that Eddie Doane was always there, in a front booth. I never knew where he lived…maybe in Booth #2. 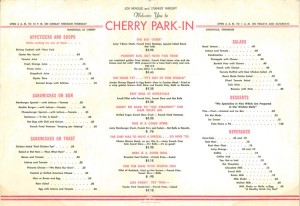 I’ve nursed many a nickel Coke to make my occupancy of the booth nominally legitimate. I usually wanted to play a couple of songs on the Wurlitzer…Only You or The Great Pretender by the Platters or Splish Splash by…I can’t remember who, but an extra nickel infrequently existed.  I suspect the owners made their money from the businessmen during the day ‘cause most Mounties were short on cash…except for a few rich kids.

You have your own memories of the Cherry Park-In, which I hope you share as comments at the bottom of this article.  We all owe a debt of gratitude to fellow East Hi classmate and former worker at the Park-In, Henry Russell, for keeping this menu and sharing it with the rest of us who wish we had been so forward thinking…or were, likewise, pack rats.  Thanks Henry!