Already crowded when the U.S. entered WWII in 1942, Knoxville High School was bursting at the seams a few years after the War concluded in August of 1945. This fact, coupled with the projected post war business expansion, led the city fathers and educators to project city growth into areas away from the core of the city around Knox High. The anticipated “sprawl” further made clear the critical need for school expansion.

Consequently, with the close of the 1951 school year, Knox High ceased to function as a high school. In the following September East, West, South and Fulton, the school that absorbed the technical and trades studies of Stair Tech which was also closed, enrolled high school students in the four quadrants of the city. As Knox High grads are quick to say, “these new schools did not replace the irreplaceable KHS, they simply were an extension of it.” Any argument to the contrary is met with fierce and warranted opposition.

There were many connections between Old Knox High and the newly spawned schools. But, primarily because of proximity, there were more remaining links with Fulton and East than with the other two expansion schools. East seemed to have a stronger tether to the mother ship than the others. The school colors were similar…both sharing the deep royal blue. Additionally, many of the tenured teachers at KHS took similar positions at EHS and more of the KHS athletes later participated at East than at the other schools.

East had one athlete that seems to forever connect the two schools and who during his high school career, excelled in sports at both institutions. That athlete is Kyle “Buddy” Cruze. Cruze was a starter at end on the last KHS Trojan football team to play, Central High School in the annual “City-County Game.”

On this Thanksgiving Day in 1950 the Trojans drubbed the Bobcats 40-7 before 12,500 fans, highly charged with the knowledge that never again would the Trojans and Bobcats line up against each other on the gridiron. This grudge match was traditionally played at Shields Watkins Stadium on the Tennessee campus, but the final game in KHS history was moved to a smaller venue, Evans Collins Stadium because of construction at the U.T. site. Fittingly, in this game Cruze scored the last touchdown scored by a Trojan player.

He was a standout on the State Championship basketball team in 1951 scoring the last 2 points scored by a Trojan in the final game against Selmer. Parenthetical to his highly successful KHS career in football and basketball, Cruze was an outstanding hurdler on the track team coached by the legendary Sam Jones.

As an EHS Mountaineer he elevated his game, or games as it were, to even more lofty levels. Picking up where he left off at KHS, Cruze scored the first touchdown scored by an East High Mountaineer on a pass completion against Rule High in September of 1951 and also the first 2 points scored by the basketball team, a field goal against Powell in the Mountaineer’s initial round-ball game late in 1951. 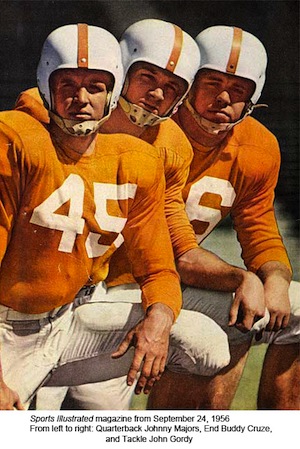 Rounding out his illustrious career, Buddy was one of only 6 athletes prior to 1952 to have been All State in two sports, football and basketball. He was further honored as the Captain of both these All State teams, the only Tennessean ever to be so honored in both sports. Another of the six so honored was Bob Fry, an East Knoxville product who graduated from KHS in its last year and like Cruze, made All State in both basketball and football and went on to play football at Tennessee.

Coach Buford Bible’s first East High team finished fourth in the State basketball tourney in 1952, but Cruze was named the event’s premier player setting 12 out of 16 Tennessee State records in the process. Surprisingly in the day of the three-point field goal and “run and gun” offenses, two of these records still stand to this day.

There is an interesting bit of lore surrounding this tournament that seems to reveal the idiosyncratic style of legendary EHS Coach Bible, arguably a man well ahead of his time as a basketball teacher and tactician. Cruze set a tournament scoring record of 47 points in the 68-59 quarter final victory over Oliver Springs. As Cruze tells it in his animated fashion, he arrived at the turnstile the following evening to enter the arena for the semi finals against the vaunted Jackson team. Much to his chagrin, he was summarily denied admission because, in his haste to not be late, the unpardonable sin to Mr. Bible, Cruze had forgotten his player pass.

Unmoved by Cruze’s predicament and unwilling to give him the dollar required for admission, Bible walked away, leaving him to fend for himself. Seeming still able to feel the nervousness he felt that evening some 60 years ago, Buddy says that he finally found Jean Reasonover, football coach Jim Reasonover’s wife, who loaned him the necessary “8 bits” to buy a ticket. When Buddy found his way to the dressing area, Mr. Bible (funny how he was always known as Mr. Bible…not Coach Bible) simply said, “hey Cruze…we are dressing in the first door on the left.” Until the day he died, Mr. Bible never said another word to him about the incident.

Cruze’s exploits as both a Trojan and a Mountaineer may frame him as an athlete but they fall woefully short in defining him as a man. Buddy went on to Tennessee where he was named to the All-SEC and All American football teams in his senior year, 1956.  He later became a very successful businessman and remains a devoted husband to his still charming wife Charlotte, nurturing father to 4, and doting grandfather to 14, six of whom are married. Further, he has been mentor and role model to hundreds in Knoxville, the city he loves and that reveres him.

The effects of a recent heart attack have taken a physical toll on Buddy, but it has only invigorated his; indomitable spirit, winsome personality, infectious smile, and patented laugh. He also is more firmly immersed in the Christian faith he committed his life to as a young boy. Over a meal and warm conversation in his home I recently asked him what the catalyst to his confession of faith in Christ was. His exact words were, “I came to realize that there is a God…and it’s not me.” As has been the way of his life, this realization prompted the conversion that cemented both his worldview and his life calling.

Kyle “Buddy” Cruze, the KHS-EHS Connection…it has a nice ring to it doesn’t it? Thanks Buddy for the standard you set and have continued to uphold.