Consider me a loyal Tennessee follower, fan, supporter…et. al.  I have been one since I saw my first game 62 seasons ago.

I love Tennessee orange. There are many other colors of orange in college football…Syracuse, Clemson, Florida (YUCK!!), Auburn, Oklahoma State, Princeton (do they still play football there?) etc. …but none can match the orange in BIG ORANGE.

I have taken all my sons and grandsons to Tennessee football games so they can appreciate the heritage of “The Hill,” that means so much to me.

I know the words to “Down The Field,” I tap my foot when I hear “Fight Vols Fight,” I get misty eyed when singing the “Tennessee Alama Mater,” and I have 3 versions of “Rocky Top” on my iPod.

GET THE PICTURE? I LIKE TENNESSEE A LOT! But, there is a limit to my commitment!

Tennessee is searching for a head football coach…again…the fourth time in six years.  I lauded the administration when they hired Derek Dooley.  I thought that we had hired a class man who could restore some dignity and pride to the football program.  And he does have class.  But, at the end of the day, a coach has to win football games to coach at Neyland Stadium.  He couldn’t and he is gone…and should be.

Phil Fulmer had lost control of the team late in his coaching tenure. His successor, the self-serving super narcissist Lane Kiffin, had succeeded in further tarnishing the U.T. program while adding to his already sullied personal reputation.  Remember his tirade while coaching the Oakland Raiders and his railing about his boss, on national T.V.

Now Tennessee is shuffling the profiles of the available coaches while pigskin pundits continue to deal additional names into this high stakes poker game.  Who should they chose?  I haven’t a clue.  But I do know who they SHOULD NOT CHOOSE.  The name of Bobby Petrino has, for some absolutely unbelievable reason, been surfaced as a possible choice. I may not know a lot but I do know that HE AIN’T THE ONE WE NEED. 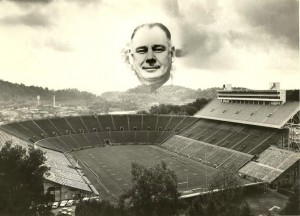 For those who don’t remember, Petrino is the phony who wrecked his Harley while taking his young female paramour for a ride…so to speak.  Only a few years earlier he reneged on a contractual head coaching agreement with the owner of the Atlanta Falcons. This dastardly act of deception occurred only hours after he assured his boss, Arthur Blank, and his football team, that he was with them “all the way.”  I remember watching him on T.V. “call the hogs,” an Arkansas’ act of support for their razorback team, the day after his departure from Atlanta.  I said to myself, “they will rue the day they hired this lying bum.”  And they soon did!

That brings us to now, and Tennessee’s consideration of Petrino to coach at Tennessee.  I can think of no one who has ever played, coached, seen, read about or heard a football game that would be a worse choice than Bobby Petrino to be the head coach of the Tennessee Volunteers.  Can you imagine how he would sell honesty, loyalty, integrity, teamwork and commitment to his players and coaches.  And what crafty yarn about “taking care of their little boy and making sure he becomes an upstanding citizen” would he spin to the parents of a recruit? And what message would Tennessee be sending to graduates, students and the world by hiring such a unrepentant reprobate? And how could this ever be explained to Coach Robert Neyland?

It’s hard for me, a longtime Volunteer to say this, but…If Tennessee were to hire Bobby Petrino, I would never watch on TV, listen to on the radio or attend a Tennessee event as long as he was there…and maybe ever.  Further, contributing to an alumni fund would be entirely out of the question. I bet a dollar to a donut that I’m not alone in feeling this way.