We called him Mr. Bible.  Not Coach Bible…contrary to popular lore…although he was.  Not Professor Bible, even though he was that too.  And certainly not Buford…at least not to his face.  Rest assured that, on occasion, players and students alike referred to him as Buford or B.A., but it was always done in private and even then, at a whisper and with a furtive glance over the offending speaker’s shoulder for fear of being caught and reprimanded. 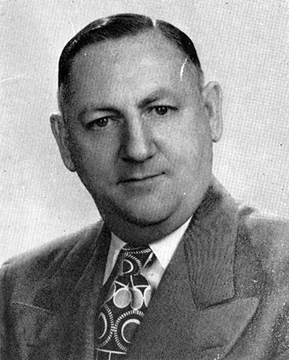 Buford Alexander Bible, the third child and second son of Andrew Shields and Amanda Thomas Bible, was born on January 15, 1905. Three more sons followed, one of which, Marshall Cameron Bible, would one day become a worthy coaching adversary of his older brother.  Buford married Reba Norman on June 1, 1928.

I was shocked the first time I saw Mr. Bible in other than a suit and tie.  He had on a short-sleeved shirt, and was standing in front of the Gulf station on Asheville Highway. In his later years he “took up daily residence there.”  Both his attire and his location were foreign to me. I vividly remembered his earlier disdain for; “hot-rods,” cigarettes, liquor, lack of concentration on studies…in short, anything non-traditional.  And here he was out of his “traditional uniform” and at a service station to boot.  My world was shaken, not irreversibly but shaken none-the-less.  I had assumed he was born in a pressed suit and wearing a white shirt with a Windsor knotted tie.  His casual appearance disabused me of that long held notion.

His basketball coaching notoriety was well-earned. He was ahead of his time in the strategy of the game…not unlike Adolph Rupp the perennial winner at Kentucky. Did he learn it as a college player at Carson Newman where he played and graduated in 1927? We’ll never know the source…, but it probably resulted partially from his college experience coupled with a tactical approach flowing from his mathematical mind.  But his fanatical concentration on well-executed but simple tactics stressed in every practice and game really gave his players a palpable confidence that was the catalyst to repeated success.

He plied his coaching trade well at a number of schools including; Coal Creek, the traditional name by which he always called Lake City, Jefferson City High School, Knox High School where he coached 16 years from 1936 thru 1951, and East High School where he was head coach from 1951 through 1966. In his thirty years of coaching success he won State Championships at Knox High in 1941 and 1951 and his teams were frequent challengers for state titles in other years.

While traditional in strategy and tactics, Mr. Bible was quite an unusual combination of predictability and quirkiness in his ancillary actions.  He was not a fan of movies…referring to them as “shadows on the wall.” But Thursday basketball practice was unusually short each week.  It was later learned that he always wanted to be home in time to see the Lone Ranger on T.V. …the “idiot box” as he referred to it.

He was consistent in repeating “bibleisms” that every former player remembers. At half time of almost every game he would stand in front of us, look down at the floor, kick his heels back on the wall and say, “if I knew what you are trying to do I’d try to help you.”  He had a way of always keeping you slightly off guard, wondering how he was going to respond, always wanting his approval.

He also held the view that any pass that wasn’t caught was a bad pass.  “But I hit him between the 2 and the three…..” …it made no difference…bad pass.  Certain players who had “wooden hands,” a perpetual inability to catch a pass, were derided by his saying, “when you think about throwing it to _______ (fill in the blank), just throw it up in the nickel seats and go back and play defense.”

He made players who wouldn’t stick their nose in a tough situation, wear a football helmet in practice.  Players who forgot equipment when packing for a game, were not allowed to borrow from the manager or another player.  No questions asked…he said it, you do it.

Mr. Bible was also the object of conflict himself…and from his own brother, Marshall.  The Buford Bible teams were known for their execution of the fast-break and “driving from behind.”  This tactic, probably named by him, was one where, after a score by the opposition, the ball was quickly thrown in bounds to a guard who was streaking to the sideline close to half court. Caught off guard, the defense was often unable to defend the action which resembled the fast-break. Knowing his brother’s penchant for this play, Marshall, the coach at rival South High, soaked the nets in water or put new and tight nets on the rims when South played East.  This made the ball slow coming through the net, thus slowing down the East offense.  With a wry grin, Marshall always denied the charge.  Could this act have been retribution for his older brother failing him when he was in his math class years earlier… a favorite story of Mr. Bible’s? Urban legend or truth…who knows!

He was also idiosyncratic about rules and admission tickets to the game.  The best story in this regard is the one about his not helping Buddy Cruze, who had forgotten his player pass, get in the arena for the semi-final game of the 1952 state tourney…even though Cruze had set the state tourney record of 47 points in the quarterfinal game the previous night. (See story here.). At the Clinton Invitational Tournament in December of 1957, I saw him make his wife, Reba, pay to get into the game. Unusual, and costly…but that was Mr. Bible.

There are numerous stories about Mr. Bible’s obsession with being on time.  In December of 1952, the “roundball” team was scheduled to play an away game at Kingsport Dobbins Bennett, at that time an arch rival and perennial tough opponent. Characteristically, the squad was told to report to the gym for a departure well in advance of the starting time of the game.  “Late” was unacceptable in Bible’s eyes, as was “on time.”  “Early” was the only recognized time in his schedule. Tom Burnette was in the lead car driven by Mr. Bible on that crisp winter afternoon and relates with relish and raucous laughter the following story told frequently over these 60 years.

All players were present at the appointed departure time except for sophomore guard Bob Small, “Mr. Perfect.” Small was a sometime starter and important cog in the tough ‘52-‘53 team. Not one to give in to lateness, regardless of the offender, the group was told they were pulling out.  The caravan, led by Mr. Bible’s 3 month-old 1953 Chevy (Mr. Bible always got the first car delivered to the Jefferson City Chevrolet dealer each year…you could book it) motored up to the exit of the east parking lot and began to cross McCalla on its way to Magnolia. At that time, the tardy Small, recognizing his plight, was racing toward the cars waving his hand to let them know he was there. Mr. Bible simply smiled, waved back at Small and the group proceeded on their way.  In words never to be forgotten by those in the car, Mr. Bible said, “if he can’t be on time, we don’t need him.”  Somehow Small got a ride to Kingsport and arrived before the game.  He didn’t start but did play, Burnette remembered.

Another frequently related and similar story is the one of Mr. Bible leaving starting center, Bill “Doc” Riggins, behind when the team was leaving for the state tournament in 1955.  The story alleges that Riggins was a few minutes late getting to the gym, where the team was to meet for the trip to Memphis.  They left without their starting center. Riggins subsequently arrived, realized his plight and raced along the probable route of travel trying to catch up. The caravan was subsequently caught heading west on Magnolia where Riggins joined the team.  This story is denied by Riggins but sworn to by Gay Valentine who says, “I know…I was there.” The story was also confirmed by Wesley Baird, Riggins’ backup center, who recalls the evening this way.  “I thought I would have to play all the way but Doc caught up with us.“  We’ll leave it to these three to “duke it out” over the difference in their memories.

Now, here is the seemingly unbelievable and little known antithesis to those stories.  One night in January of 1958 James Vittetoe was similarly late arriving at the gym for the drive to an away game.  Uncharacteristically, Mr. Bible questioned whether anyone knew anything about Jim’s tardiness.  After 15 minutes we pulled out of the parking lot next to the gym and turned West on McCalla. I was in Mr. Bible’s ‘58 Chevy as was, I believe, Ed Cooper. Mr. Bible turned left on Hembree St. and drove to Jim’s home in the first block. I went to the front door and rousted him from his living room.  As far as I know, that was the only time Mr. Bible ever stepped outside his punctuality persona and gave in to the lateness of a player. 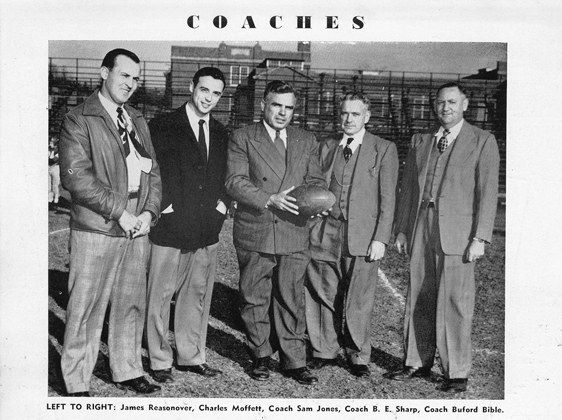 Mr. Bible was also the consummate teacher.  Those who experienced his geometry or trig classes are well aware of his ability to make math both understandable and fun….well maybe not fun.  As a small test of your five-decade memory please give Mr. Bible’s answer to this question.  “What is the shortest distance between two points?”  ….drum roll and Password Game Show music please…… If you answered “a straight line” you flunked the quiz. If you said, “the arc of a great circle,” you are correct. I bet you just said…”Oh yeah…now I remember.”

Parallel to his coaching and math-tutoring career, he taught a men’s Sunday School class at Fifth Avenue Baptist Church for over three decades.  I have on good report that he often “preached” against the effects of “demon rum and recreational drugs” to his class whose average age was 75+.”  Yep…you read this correctly!

After turning over the coaching reins to a former E.H.S. player, Frank Hall, Mr. Bible became the Principal at East, replacing his predecessors, W.E. Evans and Gale Gardner.  The story is told of a perpetually late student knocking on the locked front door, about 30 minutes after the school day was scheduled to start. In his terse and inimitable fashion Mr. Bible inquired as to what the young boy wanted.  He replied that he was there for school.  Mr. Bible informed him that classes started at 8:30 and he should go home and get a good start on the following day and, “be on time.”

Traditional, idiosyncratic, disciplined, skilled, memorable and unique…Buford Alexander Bible left his mark on thousands of students, players and friends. I’m certainly glad that I came under his influence…as are many who read this.

We would love to hear your favorite story about him.  PLEASE POST COMMENTS FOR ALL TO READ AND ENJOY!