My memory bank is chock full of vivid memories of times and events at Chilhowee Park.  My guess is that virtually everyone reading this has at least one unforgettable remembrance of this iconic Knoxville landmark.

On KNOXVILLE HERITAGE we have included a number of vintage photos of the park and the Exposition Center building that anchors the site. 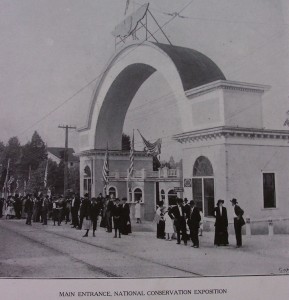 Click the photo to view the Chilhowee Photo Gallery

Ironically, I never knew the building as the Exposition Center. It seems to me that it was known as the Administration Building in the fifties…but, it has been called by many names as can be seen in the photos.

Well, this week Charlie Ellenburg sent me some interesting photos of Chilhowee Park, dating back to its construction in 1910.  They caused me to reflect back on my personal connection to this historic location.  I hope they do the same for you and that you will share both stories and photos from your times at the park.   It’ll be a treat for all of us to enjoy.

We will await the posting of your stories on the comment section… or just email them to me and I will post them for you.  But until you do, here are mine.

In 1956 my Dad taught me to drive on the road encircling the lake at the park.  He later taught my brother, David, and sister, Sally, on the same loop course.  All of us learned in a 1948 Plymouth coupe…straight shift! I never drive by on Magnolia that I don’t smile and think of those days.  My kids have heard the story a few too many…times they tell me.

In the early fifties I fished in the lake…from the shore.  A cane pole, string, a hook and worms or dough balls made up my tackle box…or tackle grocery sack to be more accurate.  What I infrequently caught would be considered bait rejects today, but I thought I was Captain Ahab.

I played Little League baseball on the field where in the fall the midway was located, on the South side of Magnolia.  The rocks left by the departing carnival each year made a groundball take some funny hops the next summer.  But we didn’t seem to mind.  It seemed as smooth as Fenway Park to us.  The field was later moved to what is now the Zoo site.  I think they also moved the rocks to the new site…or so it seemed.  I also played Babe Ruth baseball on the all skin diamond in the Northeast corner of the park, just below where the Tennessee walking horses were kept and trained.

My first real job was ushering at the horse shows held in the small oval rink lined with box seats, where the zoo now stands.  Three bucks!  Man alive…I was rich!

In 1953 the Harlem Globetrotters played on center court…”B” Court.  It was the original Trotters with Reece “Goose” Tatum and Marquis Haynes.  They played the perennial losing team the Washington Generals led by Red Klotz.  I was picked from the stands to be the butt of the joke Tatum pulled when he shot a free throw with a ball connected to his hand by a string. There must have been all of 500 people in attendance.

The most vivid memory for a broad cross section of Knoxville youth during the 50s and 60s centers on the “Fair,” as the Tennessee Valley Agricultural & Industrial Fair was commonly known.

It seemed like the Fair marked the end of summer and the beginning of fall.  Not Tennessee football…the Fair!

Jobs at the Open Air Theater were prime opportunities. Some worked at the various games on the midway and some helped clean up and set up.  Some, like Charlie Cox, parked cars on their lawn.

I remember the mechanical robot grab machine where it looked so easy to extract a “valuable piece of junk” from the pile and drop it in the chute.  I’m confident no one was ever able to make it work.  Knocking over the 3 milk bottles, made of lead I think, was a popular game.  The basketball shooting game where the basketball was slightly larger than the hoop you had to shoot it in to win…or so it seemed… frustrated many who thought it looked so easy.  Yep, it suckered me in too.

And the rides….the centrifugal swings…they looked so benign hanging down but so scary when in motion.  And the tilt-a-whirl that spun its riders into nausea.  I always liked the bumper cars…we called them the dodgems…”let’s see if I can broadside that clod in #6.” I remember the ferris wheel in the main park getting stuck one night and people had to be rescued from a swinging car at the top.

Let’s not forget the food.  Dip dogs, snow cones and “disappearing”…or so it seemed…cotton candy.  Funnel cakes hadn’t yet come on the scene.  The cacophony of sounds from the barkers, game hawkers, rides and screaming girls (sorry…but it was true…no boy would be caught dead screaming in fear on even the scariest of rides…not cool) filled the air.  The mixture of smells was also evident.  Coupled with the shaking of the rides there was the occasional… puke…sorry, but that is what it was called.

The alligator lady.   The tattooed lady… she couldn’t get a job on the midway today, ‘cause most of the girls in the audience would be more covered with ink than her.  I really liked the death-defying motorcyclist on the circular roller drome.   The sword swallower and flame eater gave me the willies.

You name it, the Gooding Midway seemed to have it.  A lot of memories were wrapped up in those spectacles.

Well, those are some of my memories, what are yours?  Send some memories and photos if you have them… it’ll be fun to see what remembrances you have.