I haven’t lived in Tennessee for almost a half a century…moved away in the dark of night on New Year’s Eve in 1964. My Dad, when asked years ago if he would like to fly in an airplane, said he would…if he could drag one foot.  I guess that’s like me about Tennessee and Knoxville.  I may not live there, but I still have one foot in Tennessee.  Always will! 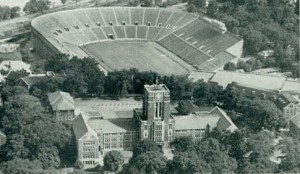 That said, you might also say that I’m a traditionalist…and you’d be right in so opining. “Rocky Top” is a catchy tune and I can sing it with the best of ‘em.  But it’s not the traditional Tennessee fight song…”Down The Field” is.  Rocky Top wasn’t even written until after; “The Run,” in the Cotton Bowl of 1951, “The Win” against Tech at Grant Field in ’56 or “The Stop” on that crisp November day in ’59 at Shields Watkins.  Further, it wasn’t even introduced at a Tennessee game until 1972.  So, consistent with Volunteer tradition, give me “Down The Field,” thank you very much.

But, Tennessee tradition may have it’s finest day on this Saturday afternoon when, in defiance of the mantra of those demanding tolerance while exhibiting none themselves, Tennessee will again have a prayer delivered before the football game.  It seems, as reported in U.S.A. Today this week, that an executive of the atheist Freedom From Religion organization sent U.T Chancellor, Jimmy Cheek, a letter requesting that the school eliminate prayer, and by inference all vestiges of religion, from university functions and sporting events.  Well, Jimmy “turn the other” Cheek stood firm and refused to succumb to the implied threat.  Instead he stood for tradition and truth.   The game, and the prayer will go on. 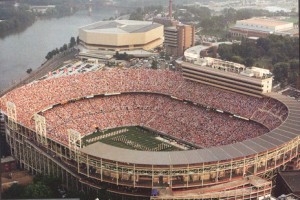 This website, KNOXVILLE HERITAGE was birthed to be a magnetic locus for remembering, reminiscing and reconnecting.  I have withstood the temptation to get into a political scuffle focusing instead on rocking chair recollections of the good ole days…a.k.a. …TRADITION.  Well, to me the Judeo-Christian ethic on which this country, and by connection the state of Tennessee, was founded is tradition…one we as a nation are sliding away from at an alarming rate and seemingly without regard to it’s inevitable consequences.  I’m scared, and angry.

So, for this reason I stand and salute Chancellor Cheek for his decision.  And I ask that you, consistent with tradition, please join me in a collective show of support in a manner 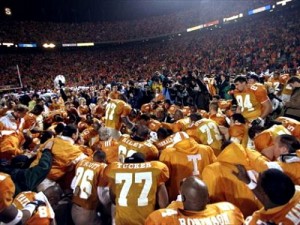 familiar to us all.  “Two bits, four bits, six bits a dollar…all for Jimmy, stand up and holler.” Now don’t you feel a little better? By the way, where is that great cheer hiding?

I would be remiss if I didn’t relate how one preacher prayed before a Tennessee game more than 4 decades ago. In an impassioned and clear way he prayed for safety for the participants, enjoyment on the part of the fans and a blessing on both teams.  The crowd was hushed and moved. It was the next phrase that changed the mood. He added, “but would you bless Tennessee just a little bit more?” The partisan crowd broke into spontaneous laughter and didn’t say it aloud but in our hearts we said “Amen.”

Let’s not forget that our Nation’s founding fathers called upon Almighty God to guide them as they began this experiment we know as the United States.  The Washington Monument, Lincoln Memorial and Jefferson Memorial each contain Biblical references to faith in God.  In the rotunda of the Capitol building beneath the gold dome, are displayed 4 gigantic murals, each depicting a different act of worshiping God. And the motto prominently displayed in the House Chambers says, “In God We Trust.”  So, contrary to the protestations of our current president, we are a nation created with the full knowledge and collective agreement that our rights and our very life are gifts from a loving, just Almighty God.

I am an un-apologetic Christian. Quite possibly the prayer before Saturday’s Tennessee-Akron game will make little difference in the lives of those hungry for a pigskin victory.  But, then again, it might just remind everyone there of the source of freedom, liberty and life. And a few there may recognize that God doesn’t care about the point spread or whether Tennessee covers that spread or not.  But he does care about everyone connected with the game, and desires a personal relationship with each one.

Thanks Chancellor Cheek.  Don’t back down.